The mushroom season has begins in the fall in the Pacific Northwest Region, and as a result, the residents of Washington are at an increased risk of exposure to poisonous mushrooms. The WAPC discourages anyone from ingesting foraged mushrooms unless 100% certain of their identity. 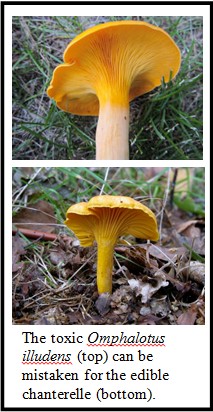 While the majority of mushrooms in Washington are nontoxic, several poisonous species grow throughout the state. The Washington Poison Center is consulted annually for cases of mushroom poisoning following mis-identification of toxic species. Some mushroom species in Washington State can produce severe nausea and vomiting, seizures, kidney and liver damage, and death following ingestion. Symptoms from severe or potentially fatal poisoning may not develop for 6-24 hours following ingestion!

If you believe that you or a family member has ingested a potentially poisonous mushroom, or if any symptoms develop within 24 hours of eating wild mushrooms, call the Washington Poison Center at 1-800-222-1222. All calls are free, confidential, and answered by healthcare professionals.