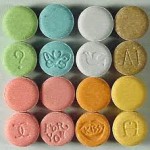 Image is representative of Molly tablets, not actual tablets involved in incident.

The Washington Poison Center has seen a number of serious cases, including at least 1 death, associated with the drug “Molly”. Molly is marketed as a pure form of Ecstasy, but in reality, many users do not know what they’re using when they ingest Molly. The poison center urges people to contact medical help if they or someone they know is experiencing adverse effects from using the drug Molly or any drug.

What is Molly?   Molly is marketed as a pure form of MDMA, or Ecstasy. MDMA is a type of amphetamine known for its empathogenic, euphoric and stimulant effects. Molly may be marketed as a hallucinogenic amphetamine.

How is Molly supplied?   Molly typically comes in tablet form and may also be sold under other names such as Legal Ecstasy, Nexus, Venus, XTC, E, Adam and other names. The tablets rarely contain 100% pure MDMA and may be adulterated with other drugs of abuse or prescription drugs.

How is Molly used?   Molly is most often ingested in tablet form but may be injected, snorted or used rectally.

Is Molly safe?   Molly has not been tested for safety or efficacy nor is it regulated by the FDA like prescriptions drugs. As such, Molly should not be considered a safe drug for use.

What symptoms does Molly cause?

How is Molly treated?   While there are no antidotes to treat overdoses on Molly or similar drugs, most patients respond well to supportive care with IV fluids, benzodiazepines as needed for agitation and monitoring for hyperthermia and seizures.

Call the Washington Poison Center at 800-222-1222 immediately for medical advice if you are worried about the health and safety of yourself or other.

All calls are free, confidential and protected by the Good Samaritan Law.