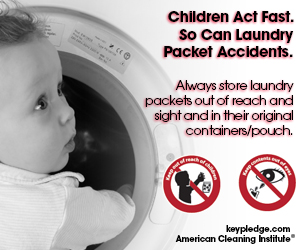 Poison centers receive many calls each year about children getting into laundry detergents. Swallowing these products often causes mild stomach upset, if there are any symptoms at all. The new highly concentrated single-load liquid laundry detergent packets seem to be different.

Single-load liquid laundry packets have become widely available over the past couple of years. Busy parents have found these packets to be an easy and convenient way to get laundry done efficiently and effectively.  However, these powerful packets contain highly concentrated detergent and need to be treated just like other common household cleaning products when it comes to safely using them, handling them, and storing them.

Some children who have gotten the product in their mouths have had excessive vomiting, wheezing and gasping. Some get very sleepy. Some have had breathing problems serious enough to need a ventilator to help them breathe.  There have also been reports of serious eye injury when the detergent gets into a child’s eyes.

According to the American Association of Poison Control Centers (AAPCC), in 2013, poison centers across the country received reports of 10,387 exposures to highly concentrated packets of laundry detergent by children 5 and younger. This was up from the 6,229 exposures that occurred in 2012.  The Washington Poison Center received 236 calls in 2013 and has already received 186 calls for 2014.  Don’t let your child be one of our numbers!

Mr. Yuk urges parents and caregivers to always keep detergent containers closed, sealed, and stored up high, out of the reach of children.  Call us at 1-800-222-1222 immediately if you suspect a child has come in contact with this detergent.

The WAPC, with the American Cleaning Institute, invites you to join people across the country and take the KEY Pledge: